Before moving his construction company to new, roomier quarters – a roughly 10,000 square foot existing facility in southern Virginia – Mueller Builders, LLC owner Mark Mueller planned changes to make the building a better fit for the business and its employees. Among the changes: restoration of 6,000 square feet of concrete floors, which, in a building that had been used previously as a machine shop and a warehouse, had seen some wear.

Mark Mueller’s goal was to have the floors restored to a smooth, shiny finish, one similar to a polished concrete floor he’d seen in a neighbor’s home. 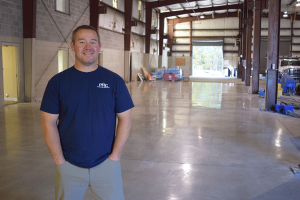 Enter Justin Boggs of Professional Maintenance Company (PMC). Located in Prince George, Virginia, PMC offers facility services – including floor cleaning and restoration – to customers in the greater Richmond area. Boggs, who’d refinished Mark Mueller’s neighbor’s floor, knew Mark, as the two had gone to high school together. Along with PMC colleague Wayne Jennings – also a friend of Mark’s – Boggs went on-site to view the floors in the new Mueller Builders space. They found a dingy, dirty surface spotted with stains – typical of a hard-working industrial floor. But Boggs and Jennings, both experienced floor-restoration professionals, knew the concrete had potential.

Calling in the Right Resource

Boggs contacted Chris Shaw of The Malish Corporation regarding the company’s recently launched Diamond Devil™ Concrete Restoration and Polishing System, designed to save steps and time while delivering outstanding results. Shaw, who’d worked with PMC before, arranged an on-site demo.

“Within 10 minutes,” says Boggs, “he had a shine on the floor.”  He adds, “We were looking for a shine, but we weren’t expecting this kind of shine.”  Impressed with its speediness and results, the PMC team decided to move forward with the Diamond Devil™ system.

Boggs and Jennings knew they had to complete the job quickly so other renovation projects slated for the building could remain on track. They began by sweeping the floor to clear it of dust and debris, and then cleaned it with a degreaser, removing any remaining water with a wet/dry vacuum.

Once the floors were clean and dry, Jennings, starting along the space’s perimeters, used the Diamond Devil™ Blue Grind Tool on the swing buffer before using the tool on a walk-behind for the rest of the floor. After that step, Jennings moved onto the Green Hone Tool, completing the perimeter first with the swing buffer, and then using the tool on the walk-behind for the remainder of the floor.

Next, Jennings switched to the Diamond Devil™ Polish Tool, again working the perimeter with the swing buffer before affixing it to the walk-behind for the floor’s interior.

At that point in the process, Boggs said Mark Mueller saw the floor and was pleased with the look. “He said we could stop there,” says Boggs. “We told him we were going to take it to the Shine stage. When he saw that, he was even more impressed with how shiny it was and with how fast we were able to get it done.”

Boggs says deck pressure on the walk-behind was about 100 pounds. He also notes they were able to employ their existing machines, using the same blocks on both their swing buffer and walk-behind, which made things simple.

A Great Finish, Ahead of Schedule

Part of the now-restored floor area will be built out as offices, with the smooth, shiny surface adding to the clean aesthetic of the space.

Boggs estimates it took the equivalent of a week to complete; he and Jennings wrapped the project a week ahead of schedule. He says he’ll likely go back a few times per year to run the Diamond Devil™ +1 Shine Tool on the floor, but little else will be needed to keep it looking good.  The system’s +1 Shine Tool reaches an unmatched gloss and clarity using only water with a swing machine.